"Esteban, a young Indian orphan of twelve, sets off on a great adventure. He follows his dream: he gets aboard a whaler, takes on the open sea, becomes a harpooner. Impressed by his tenacity and courage, the commander of the Leviathan takes him on as a ship's boy and they set off for Cape Horn. He'll discover life aboard a whaler, the crudeness – but solidarity – of the sailors, and the harshness of their world." 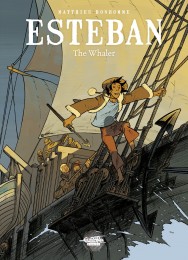 When Esteban, a young Native American boy of just 12-years-old, presents himself to the captain of the Leviathan for the post of 'harpooner', he's the laughing stock of the whole crew. But when the captain finds out that Esteban is the son of Suzanna of the Tehuelches tribe, he decides to take him on... as ship's boy. Despite his lowly post, this is Esteban's chance to discover the sailor's life, with all its hardship and its happiness, and maybe even a chance to prove what he's made of! 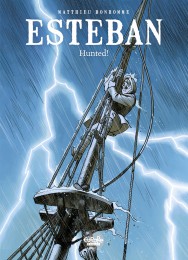 Esteban has finally earned his stripes as ship's harpooner after having saved the crew from the wrath of a huge blue whale. But now their hunting ground is jeopardized by a steam boat that's just shown up in the area. Faster and better equipped with explosive harpoons, these more modern ships massacre hoards of whales to extract only the part that sells for the highest price. In a madcap plan to neutralize their unfair competition, the captain of Esteban's ship slips aboard the steamer to try and sabotage its engine. However, he's not as gifted a mechanic as he might think, and it's not long before the crew of the Leviathan have to haul anchor and set sail... 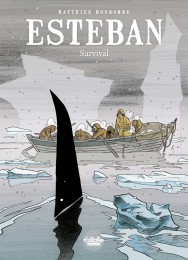 After being chased into the icebergs far south of the Tierra del Fuego by a rival whaler, the Leviathan and her crew find themselves stuck in freezing seas and unbearably harsh conditions. Unable to go any further on his beloved ship, the captain decides that their only chance of survival is to get all the crew into rowing boats and brave the treacherous seas. It's tough going, but they're tough men... 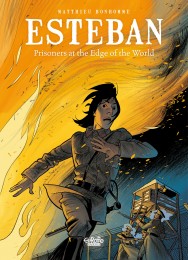 It's winter 1901. The crew of the Leviathan has ended up in the Ushuaia penal colony, accused not only of having sabotaged the governor's whaler, but also of acts of piracy resulting in the death of sailors. Needless to say, the upcoming trial will be rigged, and our whale-hunters may have to wait some time before they see the sea again. Esteban, who thankfully managed to escape imprisonment thanks to his uncle Tonto, vows to rescue his friends. He manages to get himself enrolled as a prison guard, but only for a short time. In eight days, he'll have to leave to complete his training at La Plata. So, he has 8 days to win the trust of the fearsome Sergeant La Paz, eight days of pandering to the general's wife, and eight days to plot his friends' escape... 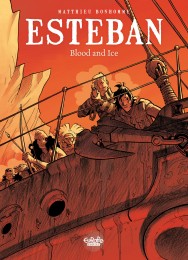 Following their escape from the Ushuaia penal colony, the crew of the Levathian sails right into the eye of a huge sea storm and eventually ends up on the banks of a frozen land, populated by hostile natives. Only Esteban's negotiating skills prevent the desperate runaways from being exterminated. When the governor of Ushuaia turns up on board his heavily armed ship, Esteban and his companions soon realize that they have no choice but to face up to him. Their one saving grace is that they have the governor's wife as their hostage. Nonetheless, it's clearly not a fair fight, and the crew of the Levathian is forced to start taking desperate measures...