In the 30 years since its original release in 1986, Jim Henson's timeless fantasy film Labyrinth has captured the minds and imaginations of authors, artists, filmmakers, and fans across the world. In honor of the film's 30th anniversary, return to the world of Labyrinth and see the beloved characters, imaginative locations, and unforgettable moments as realized by a collection of uniquely original artistic voices in an unprecedented celebration. Features illustrations and testimonials from comics luminaries and newcomers alike, including: Michael Allred, JoÃ«lle Jones, David Mack, Gustavo Duarte, RamÃ³n K. PÃ©rez, Dustin Nguyen, Mike Huddleston, Jill Thompson, Mark Buckingham, Tula Lotay, Faith Erin Hicks, and many, many more. 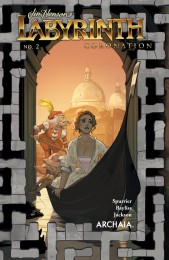 The Goblin King’s mother enters the Labyrinth, discovering a strange and marvelous world unlike anything she could imagine and one much different than what Sarah will encounter years later.