Vikings, Nordic Gods, sorceresses, drakkars, princesses…. You will find all this and more in Jean Van Hamme and Grzegorz Rosinski’s cornerstone saga. The lowly Thorgal has the gall to love Aaricia, the daughter of the Chief. Condemned to death, he makes a pact with a sorceress to save his life. Thus begins an adventure on the fringes of reality. A quintessential cursed hero, Thorgal will have to confront fantastical and extraordinary forces in this mythical world. This series gave birth to Franco-Belgian heroic fantasy – not to be missed! 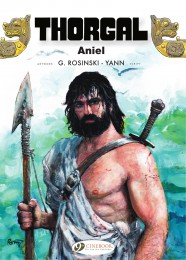 Thorgal and his friends are finally on their way back to the lands of the Vikings of the North. Time is of the essence, for his son Aniel is still possessed by an evil entity, and is doing increasingly poorly. But the trip is fraught with danger, and soon they find themselves marooned on mysterious – though perhaps not entirely unknown – shores. Thorgal will have to fight without rest to give his son a future … 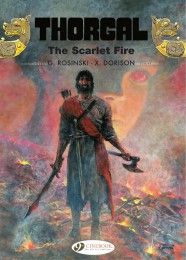 Thorgal has failed. Despite all his efforts, he wasn’t in time to save his son Aniel, and was forced to look on as sorcery transformed the young, mute boy into a teenager with terrible powers – the reincarnation of the Master of Red Magic. The Viking, convinced there is still a chance, is still not ready to give up. But many threats are converging, from within the city and from afar, and the stakes may be much higher than he imagines … 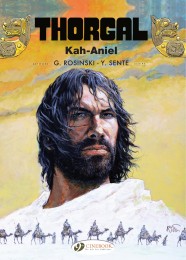 After the icy North, Thorgal and his companions now face the oppressive heat of the Middle East. On the road to Bag Dadh, the reluctant hero has got dangerously close to the bewitching Saluma, who tells him the story of the Red Mages – the very same who kidnapped his son Aniel. It doesn’t take long for Thorgal to realise that he isn’t mixed up in a simple crime, but rather in political machinations that could determine the future of the entire, sprawling megalopolis! 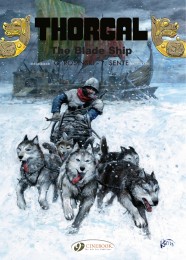 While Jolan and his companions finally learn from Manthor what their grand destiny will be, Thorgal is still on the trail of the men who kidnapped his other son, Aniel. Along with jolly mercenary Petrov, he sails down a frozen river aboard a Blade Ship – a trade vessel equipped with heavy metal blades to break the ice. The journey is fraught with dangers – storms, raiders, spies, wild animals … and a group of shipwrecked Vikings looking for a mysterious chest … 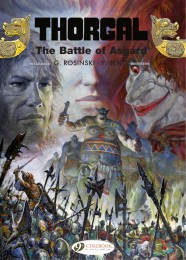 Jolan, having triumphed in the trials set by his new master Manthor, is now the Chosen One. At last his true mission is revealed: no less than storming Asgard in order to restore the immortality of Manthor’s mother, a goddess who was cast out! While he leads his army of rag dolls to the realm of the gods, Thorgal follows the trail of the Red Mages who kidnapped his other son, Aniel, the child he had with Kriss of Valnor. 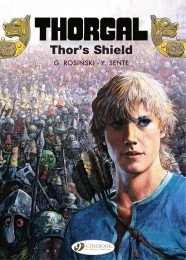 Jolan and his new companions have arrived safely in Manthor’s home. However, harmony isn’t the word yet, and the instructions from their new master don’t help: their next task can only be accomplished if all five of them work together to open a magical gate, but once they’re past that obstacle, only one of them can become the Chosen one – and that by stealing no less than Thor’s own shield! Can any of them even do it on their own? 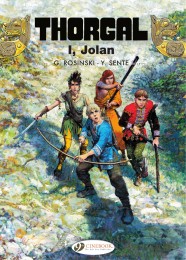 Jolan has agreed to leave his family and serve Manthor, after he saved Thorgal’s life. The mysterious mage has promised him an exceptional destiny – if, that is, the young man proves worthy of it. So begins a series of trials during which Jolan, on his own at first, will meet four other youngsters. They, too, have unusual powers. They, too, are on their way to Manthor’s castle. Will they be allies, or enemies? 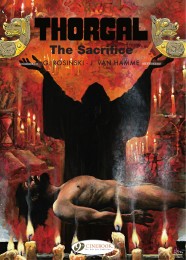 Thorgal’s family is once again reunited, but the future is bleak. The hero is unconscious, dying, and his wife and children are exhausted and starving. Aaricia’s prayers bring her some hope: the goddess Frigg is willing to save Thorgal … But her husband Odin is determined to get rid of the troublesome Child of the Stars once and for all. So begins one last challenge for Thorgal and his son Jolan – a final chance to obtain what they’ve always dreamed off: a quiet, uneventful life … 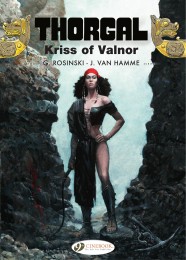 Aaricia and her children, sold as slaves to an Imperial prince, refuse to believe that Thorgal is dead, and keep trying to escape, eventually wearing off their new owner’s patience. Condemned to a year of hard labour in the silver mines, they meet someone unexpected there: Kriss of Valnor, wielding the whip of a forewoman, yet a prisoner like them. Despite their mutual hatred, the two women will have to work together to escape… 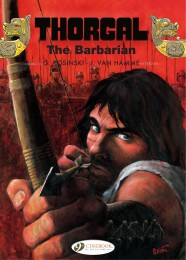 Thorgal, his family, and his new friends Tiago and Ileniya have been captured by slavers while attempting to cross the desert. The two adult men are sold to the local governor as fodder for a cruel blood game, where young nobles in chariots practice their archery skills on fleeing slaves. Turning the tables on them, Thorgal earns his and Tiago’s freedom, but not the women’s – and he has made a mortal enemy in the governor’s son... 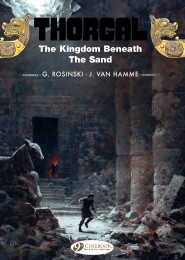 It’s been two years now since Thorgal and his family left the north to look for some hypothetical country where men might live in peace and harmony. They are sailing along a deserted and inhospitable stretch of land when Aaricia and the children convince Thorgal that enough is enough. But before they have a chance to turn around, they come across two strange characters who seem fascinated with Thorgal, and that night their boat is mysteriously torched... 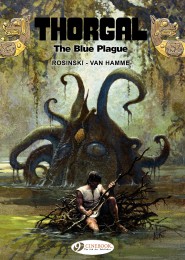 Thorgal and his family have left Arachnea’s island to continue seeking a place to live in peace. As they sail along unknown shores, they’re attacked by pirates, then rescued by Prince Zarkaj, who takes them to his palace and pampers them – especially Aaricia. But when Jolan and his mother turn out to have caught the terrible Blue Plague, the prince has them thrown into a guarded pit to die – and it’s up to Thorgal to escape in search of a cure. 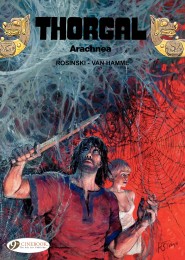 Thorgal, his family and their friends Darek and Lehla have left their island to sail south and look for a safer place to live. After a storm scatters them, Thorgal and WolfCub’s boat flounders on reefs at the foot of a strange, mist-covered cliff. One perilous climb later, the little girl is trapped by a mysterious, invisible force, and her father, after going for help, discovers a very curious city cut off from the world... 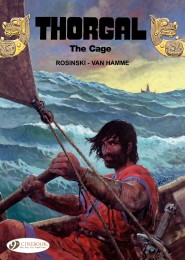 It is time at last for Thorgal to return to his family. However, Aaricia is not staying idle after her rescue by Jolan, and tries to put together a fleet to attack Shaigan’s stronghold – unaware that her husband is no longer the dreaded pirate lord. By the time the two find themselves on their own island again, Aaricia is disinclined to simply forgive everything, and locks Thorgal up in a cage while she makes up her mind about him. 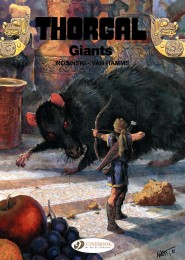 In their island fortress, Kriss and Shaigan still reign over their band of pirates and raiders. But Shaigan is beginning to have doubts, and when a prisoner who knew him calls him Thorgal, the child of the stars begs the gods of Asgard to give him back his name and his destiny. In return, the gods require that Thorgal travel to the kingdom of giants and steal from their ruler... and then Thorgal will be Thorgal again. 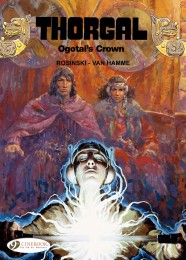 Three years ago, Thorgal lost his memory. Kriss of Valnor convinced him that he was her husband Shaigan, a merciless pirate, and they have been terrorising everyone—even the Vikings—ever since. Aaricia and Wolf Cub, exiled when Thorgal was recognised by one of the men from the northern village, have been captured and brought to Shaigan’s lair. In the end, it’s up to young Jolan to rescue his family with the help of a very special traveller... from the future! 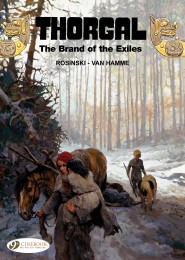 Thorgal has been gone for three years. Now, the last raiding expedition organised by the men of his village is late in returning. When a single survivor stumbles in to announce that their drakkar was boarded by the dreaded Shaigan, he also reveals that Shaigan is actually... Thorgal! Outraged, the grieving, vengeful Viking women banish Aaricia and her children and brand her an exile. All that’s left for them is to try to find Thorgal again. 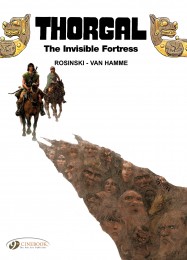 Still travelling with Kris of Valnor, Thorgal runs afoul of a local tribe. When a mysterious old woman offers him a chance to escape the hostile villagers, he accepts. But there’s more to the bargain: She says that if he can make his way into the Invisible Fortress, he’ll be able to erase his name from the Stone of the Gods, cancelling his destiny—and finally have a chance at a normal life. 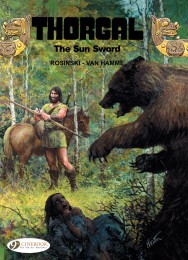 A wandering Thorgal is captured and enslaved by Orgoff, a cruel man who appointed himself the local lord after defeating the old one. Orgoff wields the dreadful power of the Sun Sword, which the peasants say makes him invulnerable. Thorgal, of course, is not convinced. Escaping, he encounters the last of the rebels against the new order—and an old enemy. Together, they will have to defeat Orgoff and his allies and recover the Sun Sword. 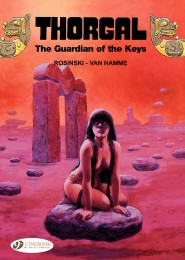