From the creators of the hit show "Critical Role" comes Vox Machina's origin story! Writers Matthew Mercer and Matthew Colville team with artist extraordinaire Olivia Samson and colorist Chris Northrop to bring you the story of where the heroes' journey began.The band of adventurers known as Vox Machina will save the world. Eventually. But even they have to start somewhere. Six would-be heroes on seemingly different jobs find their paths intertwined as they investigate shady business in the swamp town of Stilben. They'll need to put their heads-- and weapons--together to figure out what's going on...and keep from being killed in the process. Even then, whether or not they can overcome what truly lurks at the bottom of the town's travails remains to be seen! Collects Critical Role Vox Machina: Origins comics issues #1-6, one of the best selling digital comics ever! 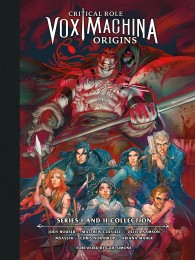 The celebrated series Critical Role: Vox Machina Origins returns! Fans of the series won't want to miss this beautiful collection. What do a flirtatious bard, a clueless barbarian, a naïve druid, and a pair of stealthy twins all have in common? They're not sure either, but one day they'll become the heroes known as Vox Machina! Follow the main characters from the smash-hit series Critical Role as they team up for the first time, facing cults and curses in the revelation of their origins and the path that will lead them to glory...eventually. Collects Vox Machina Origins I and II with never before seen artwork! 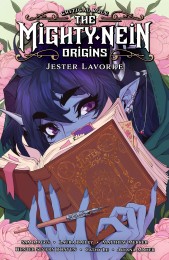 What's a nice tiefling like Jester doing in a party like the Mighty Nein? Jester Lavorre had an unconventional upbringing, even for one born in cosmopolitan Nicodranas. Daughter of the famed Ruby of the Sea, she had many opportunities for mischief as a small child, of which she took full advantage! Dive into the mystery of Jester's early years, her first meeting with the Traveler, and the fateful events that set her on a path to eventually join the Mighty Nein. Jester's story is brought to life by writer Sam Maggs (Captain Marvel; The Unstoppable Wasp) with art by Hunter Severn Bonyun, in direct consultation with Laura Bailey! This digital book is ready to take its place in your Critical Role library! 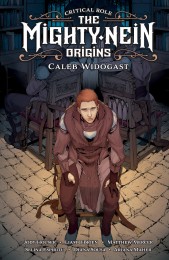 Vox Machina Origins writer Jody Houser joins fan-favorite artist Selina Espiritu, and Matthew Mercer and Liam O'Brian to reveal Caleb's troubled past in this all-new graphic novel! Fans of Critical Role won't want to miss this newest edition to their Mighty Nein library! A fire can keep you warm...or it can consume you. When Bren Aldric Ermendrud was chosen to attend the Soltryce Academy, everyone knew he would have an important future in service to the Empire. But nobody--least of all Bren himself--could foresee the cruelty he endured, and the ways in which it would break and remake him. Witness the events that transform Bren into the Mighty Nein's Caleb Widogast, and how they'll inform the path he'll take in the future.