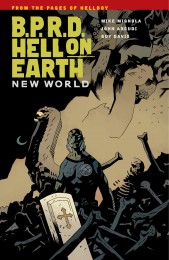 A story that began in the first issue of Hellboy concludes with the B.P.R.D. team set to permanently wipe out the subterranean colony of frog monsters that have been a story-driving plague. With Memnan Saa dead, agents Liz and Abe take on the powerful King of Fear-who ultimately reveals that it is, in fact, the B.P.R.D. members themselves who will lead the world to apocalypse, not the supernatural monsters, demons, or colossal squidbots. • Collects B.P.R.D.: King of Fear issues #1-#5. 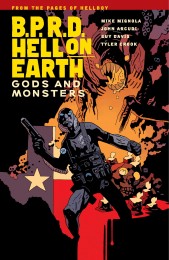 Between tracking down the vagrant followers of a prescient teen pursued by crablike beasts and dealing with a redneck priest who preaches by way of human mutilation to a trailer park populated by a cult of hillbillies, the B.P.R.D. certainly have their hands full. Can a fractured team wage a winnable war or are they fighting a battle of attrition? B.P.R.D. Hell on Earth: Gods and Monsters continues the series Comics Alliance calls "one of the best books on the stands." Collects B.P.R.D. Hell on Earth: Gods #1-#3 and B.P.R.D. Hell on Earth: Monsters #1-#2. "The acronym 'B.P.R.D.' has become for us synonymous for a good read."-MTV Geek 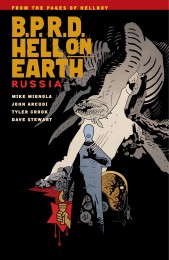 A graveyard of mutated horror is uncovered deep inside a Russian mine. With Liz still missing and Abe Sapien lying on his deathbed, the newly international B.P.R.D. sends Kate and Johann to meet the Russian equivalent of the Bureau-which readers first saw in B.P.R.D.: 1946-and face an exploding fungus monster at the Kremlin and a spreading contagion. Collects B.P.R.D. Hell on Earth: Russia #1-#5 and "B.P.R.D.: An Unmarked Grave" from Dark Horse Presents #8. * From the pages of Hellboy. * The Russian occult bureau revealed! "Is there a more talented supernatural comics storyteller than Mike Mignola?"-Wired 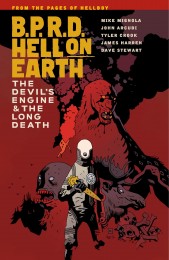 Agent Johann, the ectoplasmic man, leads a special task force through the monster-filled Northwest woods in order to hunt down and kill the man he blames for leaving him a disembodied spirit. In the Southwest, agent Devon and the psychic crust punk Fenix form an uneasy alliance in order to escape a horde of giant bat-faced monsters. 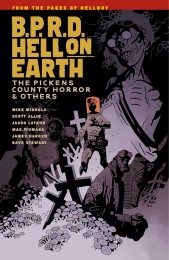 The B.P.R.D. crew investigates the site of a hundred-year-old magical ritual and Hellboy breaks into the secret library of a dead necromancer. Collects The Pickens County Horror #1-#2, The Transformation of J. H. O'Donnell, and The Abyss of Time Parts 1 and 2. 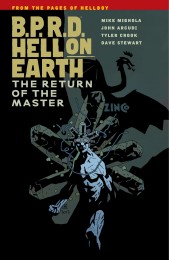 A rogue scientist who escaped the bloody massacre in B.P.R.D. Hell on Earth: Russia assembles a paranormal cult bent on world destruction. Can an elite B.P.R.D. task force hunt down the mad Russian's stronghold in time, or will monsters overwhelm a world already teetering on the edge of apocalypse? Collects B.P.R.D. Hell on Earth: The Return of the Master #1–#5. FEATURING ART BY RYAN SOOK AND EISNER WINNER TYLER CROOK! RETURN OF THE BLACK FLAME! 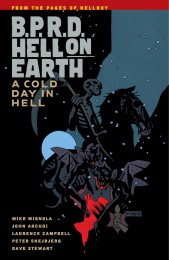 Following the deadly events of The Return of the Master, the zombie director of the Russian occult sciences division leads the B.P.R.D. to go head to head with demons from Hell. Meanwhile, Johann commands a rescue mission to locate the missing agents from The Abyss of Time. What they find is an army of mutated humans. Collects B.P.R.D. Hell on Earth #105-109. * Art by Peter Snejbjerg (Abe Sapien: The Abyssal Plain, A God Somewhere) and Laurence Campbell (Marvel Universe vs. Wolverine, Punisher MAX). 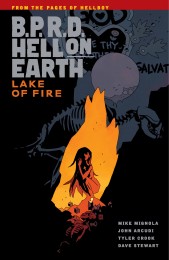 As Liz Sherman fights for her life in Utah, the BPRD plans an assault into the no man's land that used to be New York City, and the young psychic Fenix faces a monster-worshiping cult at the Salton Sea. Collects B.P.R.D. Hell on Earth #110–#115. * Art by Eisner winner Tyler Crook (The Sixth Gun). * From the pages of Hellboy! "A strong jumping on point for this series."-IGN 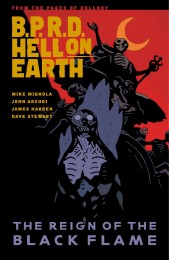 With Liz Sherman back in fiery action, two B.P.R.D. teams make their way through the monster-filled streets of the Manhattan wasteland in order to reach the Black Flame's fortress and take down his army. 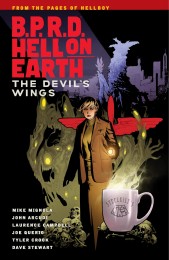