The city of Dunwall: whaling capital of Gristol and industrial hub of the Empire of the Isles. Twelve years have passed since Corvo Attano scuppered the Lord Regent's duplicitous plot against the crown and cleared his name of the Empress Jessamine's murder. Now little older and perhaps a little wiser, Corvo sets his sights on the future and securing an apprentice to continue his legacy. But when confronted by an impossible face from his past, the magically-gifted assassin finds himself once again drawn into a supernatural conspiracy, one that threatens to shake the very foundations of his ancient city! 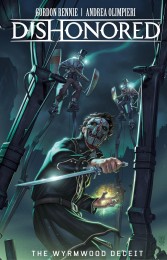 FOR THE EMPIRE! The city of Dunwall, capital of Gristol and industrial hub of the Empire of the Isles. Twelve years have passed since Corvo Attano ended the Lord Regent’s treacherous plot against the throne, clearing his name of the Empress Jessamine Kaldwin’s murder. Now, a little older and perhaps a little wiser, Corvo continues to serve as Royal Protector, striving daily to protect his daughter, Empress Emily Kaldwin, from the same tragic fate that befell her mother. But while the Rat Plague is now only a footnote in history, tranquillity is a transient notion in Dunwall and danger is never too far around the corner. From writer Gordon Rennie (Judge Dredd, Rogue Trooper) and artists Andrea Olimpieri and Marcelo Maiolo, comes this thrilling prologue to Bethesda Softwork’s Dishonored 2. “A must read for fans of the game and people who love adventure and steampunk!” – Outright Geekery “Rennie and Olimpieri: A match made in heaven.” – The Xbox Hub