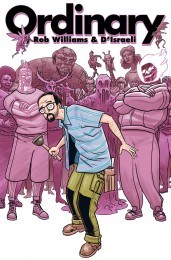 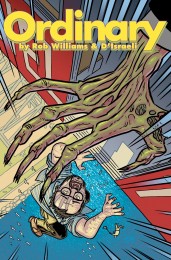 ‘Imagine a place where everyone has their own unique superpower, and you can tell just from looking at them what that power must be. Imagine a street full of people like that. Then imagine a world. Who else but D’Israeli could draw such a story? Now imagine it done with wit and wonder, and a talking bear, and a bloke who can magic beer out of thin air. Who else but Rob Williams could write it?’ – Garth Ennis What if everyone woke up with superpowers – and it was the worst thing in the world? This morning, divorced plumber Michael Fisher woke up in his crummy one-bedroom apartment in Queens, New York, to find the world had gone crazy. Everybody on Planet Earth gained superpowers… apart from him. Now all he wants to do is make it into Manhattan to make sure his estranged son, Josh, is okay. But with giants, zombies and cabbies made of living galaxies thronging the streets, does the most ordinary man alive have a hope in hell? Meanwhile, America’s leaders try to make sense of the world-changing plague, and what it means for the future of the planet. Now that every country is a superpower, Michael might be the most important man on the planet! Rob Williams et D’Israeli 2014. All rights reserved. 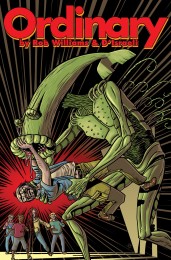 ‘Surreal and lovely, one of the most beautiful books of the year.’ – Warren Ellis ‘Rob and D’Israeli craft an uncut diamond of a premise into a warm, witty and wonderfully illustrated gem. This is lovely comics.’ – Al Ewing One day divorced plumber Michael Fisher work up in his crummy one-bedroom apartment in Queens, New York, and discovered that everyone on Planet Earth had gained superpowers… apart from him. The most ordinary man alive has now made it into Manhattan, hoping to rescue his estranged son, Josh, from the creature trapping him in his school. Meanwhile, the Vice-President has effectively staged a coup, taking command of an America braced for super-powered war. And he will go to any length to prevent Dr. Tara McDonald, the Scottish genome scientist finding a cure for this plague… With #3, this brilliant series by writer Rob Williams (The Royals: Masters of War, Revolutionary War, Trifecta) and artist D’Israeli (Scarlet Traces, War of the Worlds) reaches its cunning and deviously clever finale! Rob Williams et D’Israeli 2014.