Nothing is what it seems…not even yourself… A seemingly random murder – the first in a thousand years – is unraveling the mysteries at the heart of Rai’s very existence. As the country of Japan completes another orbit around 41st century Earth, Rai, its sole protector, turns his investigation toward two figures he never questioned before: Father, the A.I. that controls Japan…and himself. 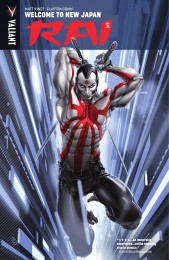 JAPAN IN THE 41st CENTURY! The year is 4001 A.D. – led by the artificial intelligence called “Father,” the island nation of Japan has expanded out of the Paciﬁc and into geosynchronous orbit with the ravaged Earth below. With billions to feed and protect, it has fallen to one solitary guardian to enforce the law of Father’s empire – the mysterious folk hero known as Rai. They say he can appear out of nowhere. They say he is a spirit…the ghost of Japan. But when the ﬁrst murder in a thousand years threatens to topple Father’s benevolent reign, Rai will be forced to confront the true face of a nation transformed…and his own long-lost humanity… Collecting RAI #1-4 by New York Times best-selling writer Matt Kindt (Unity, Mind MGMT) and superstar artist Clayton Crain (X-Force, Carnage), start reading to discover an astonishing new vision of the future that Comic Book Resources calls “an immersive experience…unlike anything else in comics."" 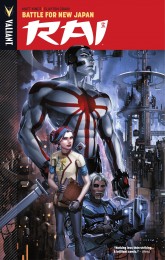 The critically acclaimed series continues as New York Times best- selling writer Matt Kindt and superstar artist Clayton Crain return for the second staggering volume of RAI! In the aftermath of the devastating battle for 41st-century Japan, Rai must pick up the pieces as he grapples with the startling truth about Father and his purpose. Will Rai remain a champion of the people or will he succumb to the same fate as the men who carried the mantle before him? And why is everyone looking at him so strangely? Go back to the future with all-star creators Matt Kindt (UNITY, Mind MGMT) and Clayton Crain (X-Force,Carnage) as they crack open a brand-new chapter for Valiant’s smash-hit ongoing series! Collecting RAI #5–8. 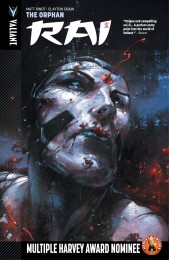 Rai falls to Earth in…“THE ORPHAN”! Broken, beaten, and cast down to Earth, Rai and his allies now find themselves hunted, persecuted, and imprisoned for their failed rebellion against Father. Stranded thousands of miles from his former home, Rai is now more determined than ever to save his friends and bring down New Japan’s malevolent ruler once and for all…but how can he do that from Earth? And just what secrets will New Japan’s rising son discover as he journeys across the face of a planet scarred by his nation’s ascent to the stars? Superstar creative team Matt Kindt (THE VALIANT, DIVINITY) and Clayton Crain (Carnage) return to their one-of-a-kind vision for the future as Rai discovers the true fate of the world New Japan left behind…and the Earth of 4001 is revealed! Collecting RAI #9-12. 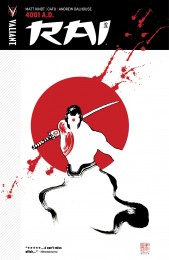 Rocketing out of the pages of 4001 A.D...the origin of Rai revealed! For the first time ever, witness the violent foundation of Father’s space-born utopia of New Japan...and, with it, the shocking genesis of the line of guardians that bear the name Rai! Born and bred by Father to enforce peace at any cost, follow the first Rai and his successors across two millennia as they chronicle the history of 4001 A.D. - from the launch of New Japan into orbit to the latest Rai’s crusade to bring it crashing back down to Earth! Valiant mastermind Matt Kindt (4001 A.D.) and visionary artist CAFU (UNITY) uncover the never-before-told story of New Japan’s rise to power...and reveal just how the Valiant Universe of today became the 4001 A.D. of tomorrow! Collecting RAI #13-16.